A big thanks to everyone who supported the tournament today! If you didn’t know, we had some volunteers collecting food at the Walmart and we added that to our donation. With their help, and the donations from club members, we raised over 1,000 pounds of food for the pantry! The back of my truck was full! We also donated nearly $900 in cash!
I hope everyone gives a big thanks Infinite Discs for donating the players pack. That gives every participant some swag for entering the tournament. And that leaves more money to donate to the Food Pantry. Thanks, Infinite! 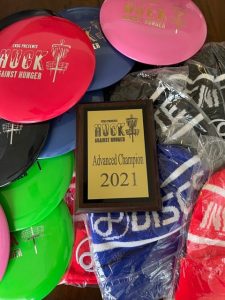 Recreation Division
For the Recreation Division, Kaden D shot a scorching 55 to take the division! There was a tie for second between Kjell R and Luke N. at 62. I used the number of total birdies as a tiebreaker, and Luke took it by one birdie. So, Luke will take the second place award.
Intermediate
In the Intermediate Division, there was a tie for first between Matt C. and Mick G. Both shot a 53. Mick had one more birdie, so he will get the Champion plaque. Coming in third, by one stroke, is Lee G. (Yeah, way to represent the over-40-year-old players! lol)
Advanced
In advanced, Garrett M. won with the hot round of 51. Just one stroke behind him were Blake J. and Eric L. Blake had a slight edge with birdies, so he will take the 2nd place award.
Let’s do this again next winter!
Here are the results: